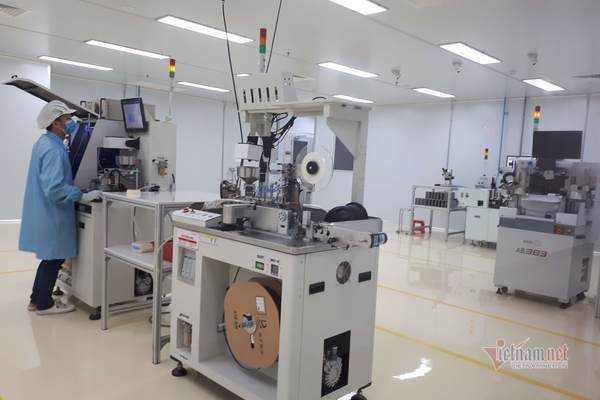 Instead of injecting money into the real estate or service sector which allows profit after a short time, Vietnam’s most powerful corporations are investing in the processing and manufacturing industry.

After opening an electrical equipment factory worth VND600 billion some months ago, Ho Quynh Hung, chair of Dien Quang Lamp JSC, said this was part of a plan to increase locally made content in products.

The company is also installing a workshop that makes electronic circuit boards for lamps and other deviceswith eight production lines.

“All enterprises want to increase the localization ratios in their production activities. If we can do well and make products in large quantities, we will be able to cut production costs,” he said.

Dien Quang has a high demand for chips. In the immediate time, the company will
install one production line first. When it has eight production lines, the capacity will be high enough to provide chips to the company, but also to other domestic enterprises.

To Van Nhat, CEO of Amaccao, said seven years ago, he realized that many Vietnamese were willing to spend big money to buy expensive products from Europe. He decided to build a factory with modern equipment to make products in Vietnam.

“We want to have products with Vietnamese brands and international quality. Only high-quality products can persuade Vietnamese to change their view that European products are always better than Vietnamese,” he said.

A lot of Vietnamese names have appeared recently in the processing and manufacturing industry, such as Truong Hai, VinFast (automobile), BKAV (smartphones) and Hoa Phat (steel), creating a new face for the industry.

However, Vietnam’s industry is still small and weak, and the components needed to make automobiles and smartphones are still sourced from imports or foreign invested enterprises.

Many people think the role of the manufacturing and processing industry has become smaller, while the services industry will serve as the driving force for economic development thanks to new technologies in the 4.0 revolution.

Nguyen Thi Xuan Thuy from the Industry Development Support Center does not agree that the role of the manufacturing and processing industry will decrease in modern times.

“Eighty percent of the world’s trade is goods trade, while only 20 percent is services trade,” she said.