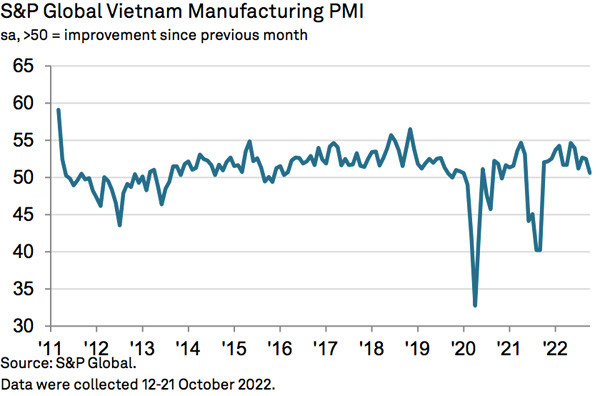 Market News 30/10/2022 vietnamnet.vn
Continued expansions in output and employment alongside muted price and supply pressures may help the sector remain in growth territory as the end of the year approaches.

Business conditions in the Vietnamese manufacturing sector continued to improve with the S&P Global Vietnam Manufacturing Purchasing Managers’ Index (PMI) in October staying above the 50-mark at 50.6.

While this showed a drop from 52.5 in September, this remained positive given the fact that a reading above 50 points means an expansion, and below the 50 neutral marks indicates no change from the previous month or even contraction, according to S&P Global.

Central to the overall growth moderation in October was a softer increase in new orders, noted the S&P Global report.

Total new business was up only slightly, and to the least extent since the current expansionary period began in October 2021. Where new orders increased, this was linked to stronger demand, competitive pricing, and the securing of new customers. There were signs of demand waning, however, including exports which also increased at a softer pace.

“October PMI data provides us with the first signs that weakness in the global economy is starting to impact growth at Vietnamese manufacturers, with both new orders and exports increased at the weakest rates in 13 months. Worries around demand conditions also hit business confidence. That said, continued expansions in output and employment alongside muted price and supply pressures may help the sector remain in growth territory as the end of the year approaches,” said Andrew Harker, economics director at S&P Global. 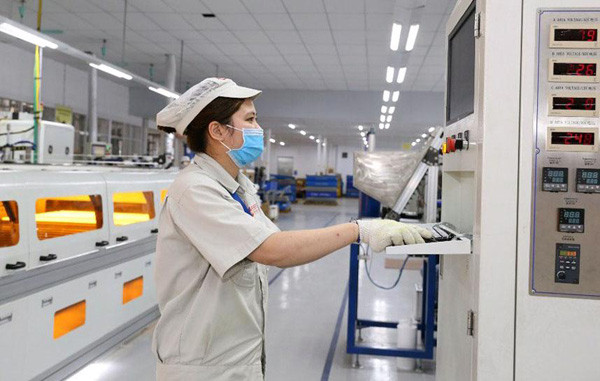 Manufacturers continued to expand production at the start of the final quarter of the year in response to further improvements in new orders. That said, in line with the trend in new business and amid signs of demand softening, the rate of expansion eased and was at a three-month low. Rises in output were seen across consumer, intermediate, and investment goods producers.

Softer increases in output and new orders were reflected in weaker growth of purchasing activity and employment in October. Input buying rose to the least marked extent in seven months, while the pace of job creation was the slowest since July. Staffing levels were still up solidly over the month, however, contributing to a reduction in backlogs of work as softer new order growth meant a lack of pressure on capacity.

Stocks of both purchases and finished goods decreased in October, reversing the increases seen in the previous survey period. The decline in pre-production inventories was the most marked in 16 months amid softer growth of new orders and purchasing, while stocks of finished goods were often depleted due to a slower expansion of production.

The rate of input cost inflation ticked higher but remained relatively modest and much softer than seen earlier in the year. Those respondents that saw input prices rise linked this to higher costs for oil, gas, raw materials, and transportation. Output price inflation also remained muted, and softened slightly from September.

For the third successive month, suppliers’ delivery times shortened marginally in October, representing a continued stabilization of supply chains following a sustained period of disruption. Softer growth of input buying reportedly reduced pressure on suppliers, although there were still some incidents of delays caused by material shortages and transportation issues. Although expected improvements in new orders and a lack of Covid-19 disruption meant that manufacturers remained optimistic that output will rise over the year ahead, confidence dropped to a 13-month low amid some concerns around signs of waning demand, it noted.

For the 10-month period, Hanoi’s IIP grew by 8.7% year on year, with manufacturing and processing going up by 8.9%.

In this period, several sectors posted strong growth, including beverage production by 17.9%; wooden products processing and production by 16.6%; paper and paper-related products by 14.2%; and transport vehicles by 12.6%.

The workforce in industrial firms as of late October expanded by 0.1% year on year, with the figure in the water provision and waste treatment up by 23%; electricity provision and distribution by 0.2%.