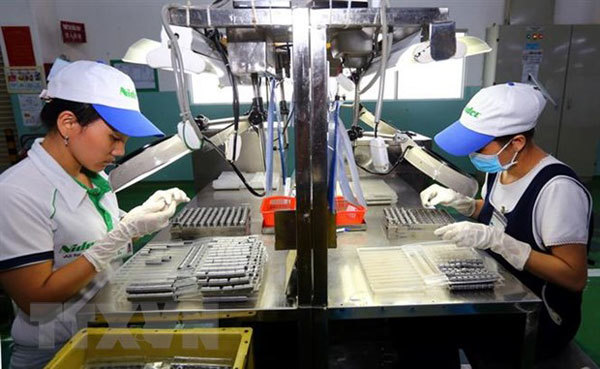 Workers at a factory at the Tan Thuan Industrial Park in HCM City. VNA/VNS Photo

HCM City has, for instance, exceeded this year’s FDI target despite the Covid-19 pandemic, racing to more than US$591 million in the first 10 months, a 7 per cent increase from the same period last year, according to the HCM City Export Processing and Industrial Zones Authority (HEPZA).

The investment was focused in sectors prioritised by the city government, including supporting industries, Hua Quoc Hung, head of HEPZA, said.

Six of the 11 newly licensed foreign companies are in supporting industries, he said.

Other localities in the south have also licensed a number of large foreign projects in supporting industries this year.

Binh Duong Province has licensed a $20 million venture by Singapore’s Ever Giant International Private Limited in the Bau Bang Industrial Zone and a $30 million project by Singapore’s Sung Shin Tech Limited at the Tan Dong Hiep B Industrial Park.

A majority of FDI in Dong Nai Province this year has gone into supporting industries, according to its Industrial Zones Authority.

Many foreign companies in supporting industries in the province have increased their investment. Germany’s Schaffler Vietnam based in the Amata Industrial Park pumped in another $50 million and South Korea’s Chang Shin Vietnam at Thanh Phu Industry Park increased its investment by $87 million.

Fifteen of 30 Japanese enterprises diversifying their supply chains to Southeast Asia under the Japanese Government’s pandemic stimulus package have opted to move to Vietnam, according to the Japan External Trade Organisation.

They include nine small and medium-sized enterprises and six large ones, with most producing medical equipment, semi-conductors, mobile phones and parts, and air conditioners.

Vietnam has become a preferred alternative manufacturing base for its facilities and labour costs, according to a report on the industrial property market released recently by Savills Vietnam.

Multinationals producing high value added products such as electronics, under increased pressure to cut costs, would shift more and more to Vietnam and the rest of Southeast Asia, the report added. VNS