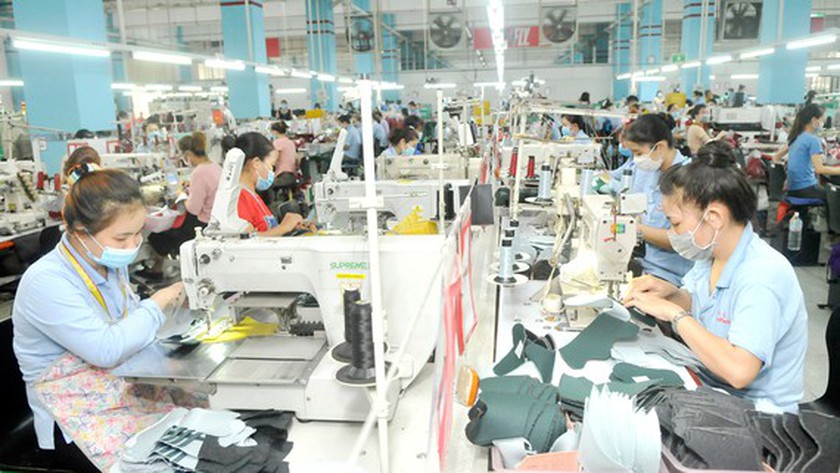 Despite the difficulties caused by the Covid-19 pandemic, the leather and footwear industry still achieved double-digit export growth, with many enterprises having had long-term orders.

After a long time struggling to maintain operations due to the negative impact of the Covid-19 pandemic, many enterprises in the leather and footwear industry have now found a way to keep production. Many enterprises even have received many orders.

“Since the Covid-19 pandemic occurred, especially during the outbreak in Europe, customers in this market canceled nearly 80 percent of orders. The few remaining customers asked to defer payment or discount prices, causing the company to fall into difficulties. Almost every month, the company had to make up for losses to maintain production. Fortunately, we now have reconnected with our customers and reached an agreement to share difficulties and profits in the context that the pandemic will continue to develop complicatedly. Owing to that, we have had enough orders until the end of the year,” said Mr. Dang Van Ngoc, Director of Tan Phat Company Limited in Hoc Mon District of Ho Chi Minh City.

According to Chairman of the Vietnam Leather, Footwear, and Handbag Association (Lefaso) Nguyen Duc Thuan, orders for footwear and handbags are shifting to Vietnam more and more. This is also the time and the opportunity for enterprises to restore production and reconnect supply chains. Lefaso’s representative also said that although the production and business situation of all enterprises has not yet returned to normalcy as before, in general, many enterprises have maintained their performance and overcome difficulties, making good use of the market. For example, in early 2020, Vinh Yen Shoes Joint Stock Company encountered several difficulties because people in the EU and US markets tended to cut spending. Besides, many supermarkets were closed for Covid-19 prevention. However, with many flexible administrative solutions, from the last months of 2020 to now, the production and business activities of Vinh Yen Company have thrived. At the end of 2020, the company achieved revenues of over VND320 billion, with 2 million pairs of sports shoes. It is expected that the company will get about VND380 billion this year.

Good news from the General Department of Vietnam Customs, in the first five months of this year, footwear export turnover reached nearly US$8.4 billion, up 25.5 percent compared to the same period last year. Noticeably, this product currently accounts for 6.4 percent of the country’s total merchandise export turnover in the first five months of the year and ranks fifth in export turnover among Vietnam’s export commodity groups, after cellphones, computers, machinery, and garments and textiles. The traditional and largest markets of Vietnamese footwear for many years include the US with an export turnover of $3.35 billion, the EU with $1.92 billion, and China with $830.94 million.

According to the Ministry of Industry and Trade (MoIT), the leather and footwear industry has posted impressive growth during this time because it has made good use of tariff incentives in the EU-Vietnam Free Trade Agreement (EVFTA) by meeting the rules of origin of goods. In the first quarter of this year, the proportion of footwear products exported to the EU market using the EUR.1 C/O form under the EVFTA is up to 98.98 percent. However, the MoIT also acknowledged that the origin criteria for footwear products in the EVFTA are relatively flexible and allow importing raw materials outside the bloc to produce goods. The disruption of the global supply chain due to the impact of the Covid-19 pandemic in the past time is an alarm for the domestic leather and footwear industry when it is heavily dependent on imported raw materials. Therefore, to be able to develop sustainably and make the most of tariff incentives, as well as opportunities brought by the EVFTA, enterprises need to focus on balancing the development of domestically-produced raw materials to serve production and export in the future.

“To develop supporting industries, enterprises need financial support. Specifically, there should be a preferential mechanism for loans or tax reduction. Reducing taxes for enterprises investing in supporting industries will help footwear products to be more competitive than those imported from China, as well as other countries. We hope that the strategy of developing raw materials and accessories will create specialized industrial zones for the leather and footwear industry,” said the representative of Lefaso.

According to Ms. Nguyen Thi Xuan Thuy, Head of the Department of Integration Strategy and Policy under the Institute of Industrial Policies and Strategies, among 3,000 leather and footwear enterprises, only 17 have design activities, and 400 enterprises produce auxiliary materials and accessories or processing intermediate stages. Raw and auxiliary materials for leather and footwear only focus on average and over-average product lines. The rest still have to be imported, making the added value of products not high. Therefore, the domestic supporting industries are still the sector that needs developing if the leather and footwear industry wants to make a strong breakthrough.