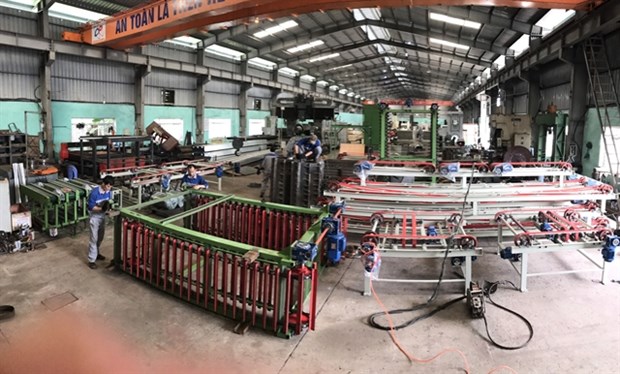 Nguyen Quang Hieu, general director of PetroVietnam Marine Shipyard JSC (PV Shipyard), told Nhan Dan (The People) newspaper that there were enormous opportunities for mechanical engineering firms to tap into the lucrative local market with a scale of up to billions of US dollars.

With each tonne equivalent to 4,000 USD, including the cost of materials, on average, there would be about 1.2 billion USD worth of market share for local mechanical engineering enterprises, Hieu said.

In the past 5-10 years, Vietnam has spent about 40 billion USD each year importing equipment and machinery from abroad to serve the entire economic sector, including industrial production, agriculture, infrastructure construction, services and national security. This is a large demand that not many countries have, according to Long.

The country will also implement many essential and large-scale projects, such as the National Power Development Plan for 2021-30, Long Thanh International Airport and inner-city railways, traffic works and irrigation, which means the local mechanical market remains lucrative, according to industry experts.

However, domestic mechanical engineering, mostly small and medium-sized, has failed to gain a larger share of the domestic mechanical market due to their limited financial capacities, lack of equipment, poor linkages between companies and insufficient supportive policies from the Government.

General Director of LILAMA Corporation Le Van Tuan said mechanical engineering was a key industrial sector and the backbone of national development. However, enterprises still had to find their way to develop due to the lack of a Government resolution for the industry.

Increasing connectivity a must

To gain a larger market share, Hieu from PV Shipyard said businesses should draw up an effective investment plan focusing on high connectivity.

For example, to manufacture large structural equipment such as offshore wind turbine foundations, it is necessary for a mechanical engineering firm to build a large factory which also comprises a deep-water port and has modern machines installed. Each factory must have capital ranging from 30-50 million USD.

Meanwhile, the capital shortage was a major weakness of most local mechanical engineering businesses. So they needed to enhance their cooperation to create strength, Hieu said.

To deal with the issue, Hieu said, his company would team up with other businesses with sufficient financial capacities, working in similar areas while using projects as mortgages to get bank loans.

Besides closer links among enterprises, an overall development strategy for the industry was also vital, Deputy Chairman and General Secretary of VAMI Nguyen Chỉ Sang said.

Preferential and protective policies of the State had not met the expectations of the industry, Sang said, adding that VAMI would submit the Government for opinions on the issuance of the Law on Mechanical Engineering.

“When everything was legalised, the Government’s support policies for the industry would be implemented,” Sang said.

Earlier, VAMI forecast the total demand of the domestic mechanical market to reach an estimated 300 billion USD by 2030. The need for machinery and equipment for industrial projects such as thermal power, hydroelectricity, chemical, mining and mineral processing is about 120 billion USD.

Vietnam has signed many trade agreements, and multinational companies are expanding to find joint venture partners and set up production factories in Vietnam. The trend of moving supply chains is a great opportunity for many businesses, including the mechanical engineering industry.

Vietnam is home to about 25,000 operational mechanical engineering enterprises, accounting for nearly 30% of enterprises in the country’s processing and manufacturing industry, according to the Ministry of Industry and Trade’s Department of Industry./.