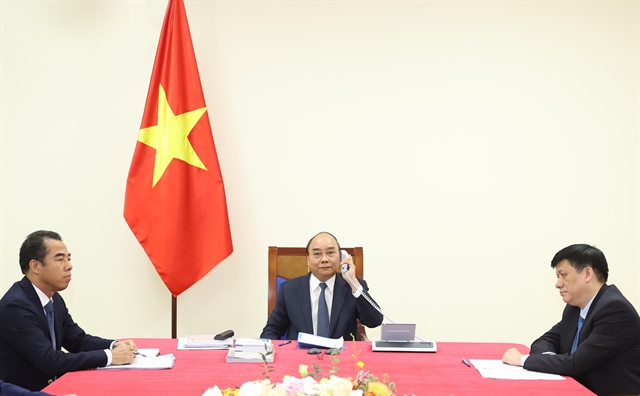 HÀ NỘI — German Chancellor Angela Merkel hopes Việt Nam will serve as a bridge to connect Germany and the Indo-Pacific as the European country aims to engage deeper with the region.

The German leader made the remarks on Tuesday during a telephone conversation with Vietnamese Prime Minister Nguyễn Xuân Phúc as the two countries celebrate 45 years of diplomatic ties this year, adding she highly valued the important role of the Indo-Pacific in the 21st-century world order.

Phúc appreciated the newly adopted Indo-Pacific strategy and policy guidelines and welcomed the robust and constructive role of Germany in the region based on its support for the central role of ASEAN and promotion of rule of law and co-operation in the region.

He also stressed the importance of ASEAN’s recent statements on related issues including the Joint Communique of The 53rd ASEAN Foreign Ministers’ Meeting on September 9 and the Chairman’s Statement of The 27th ASEAN Regional Forum on September 12.

The two leaders also highlighted the importance of settling disputes in the South China Sea (called East Sea in Việt Nam) by peaceful means, on the basis of international laws and the United Nations Convention on the Law of the Sea 1982, and efforts to uphold peace, stability, security, safety and promote freedom of navigation and flight in the region.

Regarding bilateral co-operation, the two leaders were glad at the deepening of ties in the last 45 years.

Phúc said Việt Nam cherished its relations with Germany, a country with an important voice and role in Europe and international arena.

Merkel also stressed the important achievements in bilateral relations and expressed her belief there are new, big chances to come in Việt Nam-Germany co-operation.

The two countries agreed on stepping up delegation exchanges, especially high-level visits, once conditions allow it, and further co-operation to effectively implement the Strategic Action Plan.

The Vietnamese Government leader thanked Chancellor Merkel and German partners and friends for their support for the development of Việt Nam-EU relations in recent years, especially in promoting the Europe-Việt Nam Free Trade Agreement (EVFTA) and the EU-Việt Nam Investment Protection Agreement (EVIPA), opening up great prospects for co-operation between the two sides, giving a huge boost to economic recovery and cementing the two sides as each other’s leading economic partners.

Merkel expressed her delight at the entry into force of EVFTA, marking an important milestone in bilateral ties in terms of economy and strategy. She congratulated Việt Nam on its successes in the fight against the COVID-19 pandemic and thanked Việt Nam for donating masks to Germany earlier this year.

Phúc thanked the German Government for its decision to support the textile and garment industry in several countries affected by the pandemic, including Việt Nam.

He said Việt Nam would be ready to continue to work with Germany in COVID-19 prevention and control, support each other in terms of a COVID-19 vaccine, and work towards ensuring that all people will have access to COVID-19 medicines, while also promoting trade, travel, and economic recovery.

The two countries’ highly appreciated the close co-ordination and support between Việt Nam and Germany in international forums and organisations, especially at the United Nations where the two countries are both non-permanent members of the UN Security Council, in the spirit of sharing common interests, embracing multilateralism, and promoting the role of the UN and other multilateral institutions.

As Việt Nam is the Chair of ASEAN in 2020 and Germany the rotating Chair of the EU in the last six months of 2020, Việt Nam and Germany are also committed to continuing their efforts to promote connectivity between the two regions, looking towards lifting EU-ASEAN relations to a higher level. — VNS