Market News 15/10/2022 thoibaotaichinhvietnam.vn
The Saigon Hi-tech Park (SHTP) in Ho Chi Minh City has attracted more than 12 billion USD in domestic and foreign investment since its establishment 20 years ago. 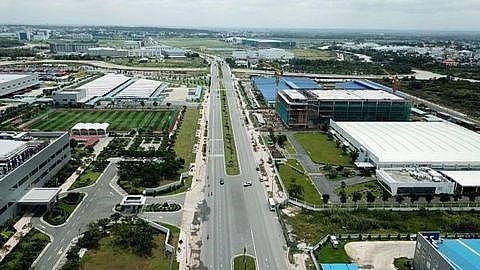 Speaking at a meeting last week on the occasion of its 20th anniversary, Dr Nguyen Anh Thi, head of its management board, said it included 51 foreign direct investment (FDI) projects worth more than 10.1 billion USD.

They include those by high-tech giants such as Intel and Jabil from the US, Nidec, Nipro, Nippon Telegraph, and Telephone (NTT) from Japan, Samsung from the Republic of Korea, and Datalogic from Italy.

There were also 110 local projects worth 1.93 billion USD.

Thi promised to offer favourable conditions to attract investment in the tech and supporting industries.

For this, it had organised high-tech supporting industry development programmes to help local firms link up with lead firms through business matching activities, and building export processing zones and industrial parks across the country, he said.

Last year, the park’s exports of high-tech products were worth 20.9 billion USD, or 52% of the city’s total exports, and are expected to rise to 23 billion USD by the end of this year, he said.

Founded in 2002, the 913ha park targets to become a world-class science and technology park by 2030.

“Improving the quality of the human resource is the most important factor,” Thi said.

It was vital to enhance links between educational institutions, businesses and the park, he added.

The park plans to set up a plant and an R&D centre with the intention of making Vietnam its new manufacturing base, according to Thi.

It also wants to increase investment in manufacturing and set up training schools for engineers.

More than 10 trillion VND (425.44 million USD) has been invested in developing the park, 1.98 trillion VND by the central Government and the rest by the city.

Another 4.5 trillion VND was invested by the private sector in the telecom infrastructure, ready-built factories, logistics and warehouses, and others./.