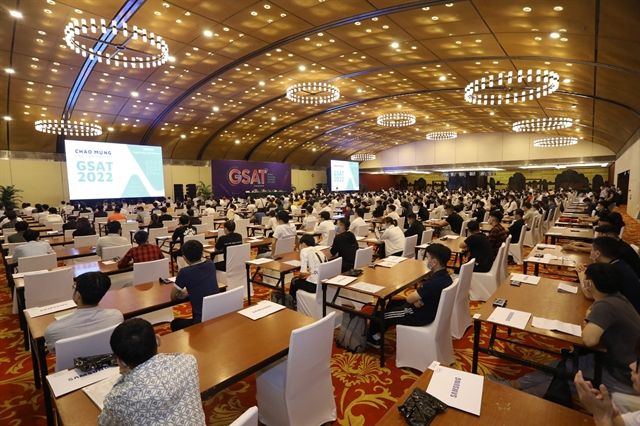 In order to find and nurture successful human resources to ensure sustainable development in Việt Nam, Samsung Vietnam has annually organised recruitment on a large scale, with a frequency of at least twice a year since 2011.

HÀ NỘI — Samsung Vietnam organised its third recruitment drive for university graduates in 2022 at the Global Samsung Aptitude Test (GSAT) in Hà Nội on Wednesday as one of its efforts to demonstrate commitment to long-term and sustainable investment in Việt Nam.

Similar tests were also held in March and June this year.

GSAT is a global Samsung competency test for university graduates, consisting of three basic parts: “logical math”, “reasoning” and “visual thinking”. This is one of the important rounds in the recruitment process of employees who are university graduates for all Samsung Group’s companies in the world.

In order to find and nurture successful human resources to ensure sustainable development in Việt Nam, Samsung Vietnam has annually organised recruitment on a large scale, with a frequency of at least twice a year since 2011.

Particularly in 2022, Samsung Vietnam has held three consecutive recruitment tests, bringing job opportunities to thousands of candidates who are engineers and bachelors. A large number of candidates attended the test. — Photo courtesy of Samsung

Notably, in this third recruitment, in order to prepare for the plan to operate Samsung’s new R&D centre in Hà Nội (SVMC) by the end of this year, as well as preparing personnel for the R&D activities of new projects of Samsung SDS, Samsung Vietnam will recruit a large number of staff in the information technology (IT) field.

This is Samsung’s effort to help Việt Nam advance high technology, support national digital transformation, and advance the development of the digital economy, society, and citizenship.

Choi Joo Ho, president of Samsung Vietnam, said: “2022 is a special year for Samsung. Not only are we holding three large-scale recruitment tests in a row for the first time, but this is also the year that Samsung is putting new development and investment expansion plans into action.

“We think that in the future, Samsung will work closely with high quality human resources to further the socio-economic development progress of Việt Nam. Samsung maintains the faith in Việt Nam and will not change our investment strategy.”

Samsung’s continuous large-scale recruitment is also the proof of the success in investment, research – development and production – business activities in Việt Nam.

Samsung Vietnam continues to succeed and continuously expands these activities. Its accumulated investment in Việt Nam is expected to exceed US$20 billion by the end of this year.

Samsung’s new R&D centre in Hà Nội, with an investment of up to $220 million, is being completed and will be inaugurated by the end of 2022, in line with the commitment with the Vietnamese Government.

Samsung is also making efforts to bring employees the best working environment. Recently, according to the survey results of Forbes magazine, a prestigious American publishing and media company, co-operating with Statista, a German Market Research firm, Samsung topped the ranking of the best employers in the world for the third year in a row. This result reflects Samsung employees’ pride and satisfaction in the workplace, and at the same time, shows the company’s reputation in the field of technology and information technology. — VNS