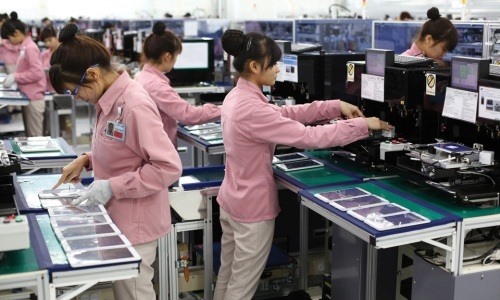 SEHC will become an enterprise specialising in the manufacture of products for exports at the Sài Gòn High-tech Park. — Photo vnexpress.net

If approved, SEHC will become an enterprise specialising in the manufacture of products for exports at the Sài Gòn High-tech Park.

The company is required to reach an export ratio of at least 90 per cent if it wants to enjoy zero import and export duties and other tax incentives applicable to export processing companies.

The city government expects the transformation of SEHC Company to create conditions for not only support businesses in the Samsung supply chain but also the local supporting industry to further invest in key production areas, thus adding more value to products and services.

The proposal is part of the city’s efforts to fulfill its commitment to create a stable and favourable investment environment for foreign investors and earn the confidence of foreign investors, especially Samsung so that it makes Việt Nam the focus of its production and export to the global market.

This would in turn benefit the South Korean giant’s local suppliers, it said.

SEHC, which is a subsidiary of Samsung Group and began operations in Việt Nam in June 2016, produces and assembles smart TVs and LED screens.

In 2018 the management of the Sài Gòn Hi-Tech Park in District 9, where SEHC is based, had made a similar proposal, but it was rejected by the Ministry of Finance because the company’s export ratio between January 2016 and June 2018 had only been 75 per cent.

Besides, it said SEHC was in a hi-tech industrial park, not an export processing zone or industrial or economic zone.

According to regulations laid out under Decree No 82/2018/NĐ-CP, export processing enterprises are those operating inside an export processing zone or manufacturing products exclusively for exports if based elsewhere.

Export processing enterprises can buy building materials, stationery, food, foodstuffs, and consumer goods from Việt Nam for carrying out construction works or meeting the needs of running offices and the basic needs of managers and staff working for them.

Based on these regulations, experts have varying opinions on the conversion of SEHC into an EPE if the city government’s proposal is approved.

Trần Xoa, director of Minh Đăng Quang Law Company, said conversion into an export processing enterprise would not help the company get any more preferences since its parent company, Samsung, is enjoying the most preferences.

Đỗ Thiên Anh Tuấn of Fulbright University Vietnam said it is necessary to clearly point out the benefits HCM City would get from the transformation of SEHC into an export processing enterprise before approving it.

The city government should get SEHC to make concrete commitments with regard to benefits it could bring to the city following the conversion.

Other analysts concurred with Tuấn saying Việt Nam should have specific requirements of foreign investors such as how many jobs they would create and the ratio of domestic companies that would be allowed to participate in their supply chain.

In the first few months of this year many banks had to increase their risk provisioning for bad debts, which were on an upward trend due to the pandemic’s negative impacts on many companies and individuals, affecting their repayment capacity.

Nguyễn Cảnh Vinh, acting director of Eximbank, said by June the lender’s bad debt ratio had increased to 2.08 per cent from 1.71 per cent at the beginning of the year.

Consequently, it had to increase its provisioning to VNĐ220 billion (US$9.5 million).

The situation was quite different from the same time last year when the bank did not have to make any provision and even received VNĐ43 billion from the Việt Nam Asset Management Company thanks to settlement of some old bad debts.

The restructuring of debts for businesses that have been affected by the pandemic has also decreased the bank’s pre- and post-tax profits by 28 per cent to VNĐ552 billion and 441 billion.

Kienlongbank’s bad debts ratio rose from 1.3 per cent earlier this year to 6.59 per cent or VNĐ2.25 trillion by June 30, the highest rise of any bank.

This resulted in risk provisioning increasing by 229 per cent and pre-tax profit falling by 30.4 per cent to VNĐ103 billion.

Vietcombank, the largest bank in Việt Nam, could not avoid an increase in bad debts either: they increased from 0.79 per cent to 0.83 per cent.

Its sub-standard debts and doubtful debts were up 58 per cent and 56 per cent.

Consequently, its risk provisioning rose by 58 per cent to over VNĐ4 trillion as of June 30.

Its pre- and post-tax profits decreased by 3 per cent year-on-year to VNĐ10.93 trillion and VNĐ8.79 trillion.

Experts said banks’ bad debts are expected to grow rapidly in the near future since many restructured their loans amid the pandemic to give affected businesses some breathing space and ensure they did not become bad debts.

Banks had to roll over debts, extending their repayment periods, enabling many borrowers to get new loans.

But the central bank has allowed lenders not to treat them as non-performing loans, which would have required provisioning.

Analysts fear many of the debts are likely to turn bad if the health of companies does not recover soon, and banks have merely delayed the day of reckoning.

Based on a 4 per cent GDP growth scenario for this year the banking sector’s bad debts ratio in their balance sheet (not including bad debts sold to the VAMC) is expected to reach 2.41 per cent by year end, up 0.78 percentage points from last year.

Given the current uncertainties, what banks should do is to focus on strengthening provisioning, improving their financial capacity and preventing liquidity risks.

After five years of implementing the National Assembly’s Resolution 42 and Project 1058 on restructuring credit institutions in association with bad debt settlements in 2016-20, the banking industry has made dramatic improvements in many areas including financial scale, credit quality and restructuring, efficiency, and security of the system.

However, the pandemic outbreak means bad debts remain the main target of banks’ restructuring process for the next five years (2021-25). — VNS