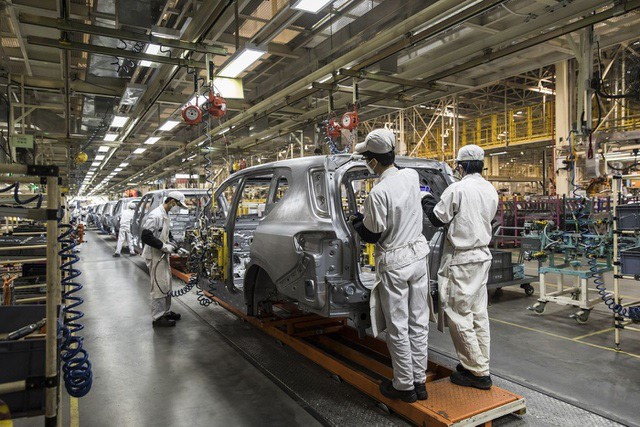 The automobile manufacturing and assembling industry in Vietnam currently only meets about 70% of domestic consumption demand because the supporting industry is still limited and facing many difficulties.

According to the General Statistics Office, the output of some automotive industry products in the first 6 months of 2020 decreases compared to the same period in 2019, such as ignition wire sets and other wire sets used for motor vehicles. more than 50.1 million sets, down 13.85%; other equipment used for engines of motor vehicles reached 17.66 million units, down 11.18%. In contrast, the output of some products increased over the same period last year, such as: Other parts for motor vehicles reached 561.32 million units, up 5.99%; synthetic rubber and oil-derived rubber substitutes, in primary form or in sheets or strip, reached 24.05 thousand tons, up 4.56%.

Table : Output of some SI products of the automobile industry in the first 6 months of 2020

Currently, the automobile manufacturing and assembling industry of Vietnam only meets about 70% of domestic consumption, meaning that 1 out of every 3 cars purchased and consumed must be imported. Meanwhile, the cost to produce a car in the country is currently 10-20% higher than imported cars, so it is difficult to compete with imported cars.

For a specific example, a Thai company produces and sells a car’s fuel tank cap for $ 1.5, while a Vietnamese company sells for $ 3.8. This is just a very small part of thousands of different components that can produce an automobile.

A representative of an automobile manufacturing enterprise said that each year, the enterprise produces more than 80,000 cars for supply to the market, but over 80% of components still have to be imported. The localization rate of the automobile production and assembly industry is only about 15%. The domestic supporting enterprises can only provide a few simple components and the prices are still high.

High prices and difficulties in competition lead to many domestic supporting companies’s hesitance to produce components for cars. In addition, domestic components are expensive partly due to low production and consumption in Vietnam. In 2019, the new nationwide market will produce and sell about 400,000 vehicles.

Although the Government has support policies, but enterprises in the supporting industry of the automobile industry still face difficulties because they can hardly step into the supply chain that has been previously shaped by businesses. industry and experience in the industry.

In order to develop the automobile manufacturing industry, produce many cars, have good sales and competitive prices, it requires businesses to be proactive to develop supporting industries and reduce component costs. and accompanying the business will be supportive policies of the State.

In order to reduce the production cost of car fuel tank cap, the Vietnam Automobile Manufacturing Association has cooperated with an enterprise to hire foreign experts to support and minimize costs. After that, the cost of manufacturing this product fell from 3.8 USD to 2.5 USD. However, there is still a gap of more than 1 USD for this component and it is not yet localized.

To support businesses, recently, the Government has issued Decree 57 amending and supplementing Decree 122, stipulating the application of 0% import tax rate for raw materials and components that cannot be produced domestically for the period 2020-2024.

Previously, Decree 22 on the application of the 0% import tax rate for components also helped Vietnamese automobile manufacturing and assembling enterprises to save VND 9,500 billion, because of tax refunds.

In addition to preferential import tax, many opinions suggest that in order to increase the output of cars and help the supporting industry develop, it is very necessary to reduce the special consumption tax.

For the same type of car, currently the selling price of a domestically produced one is 10-20% higher than that of an imported car. Experts forecast that, if all tax incentives are implemented, domestic car prices will decrease further and be equal to imported cars, from which competitiveness will be raised.​