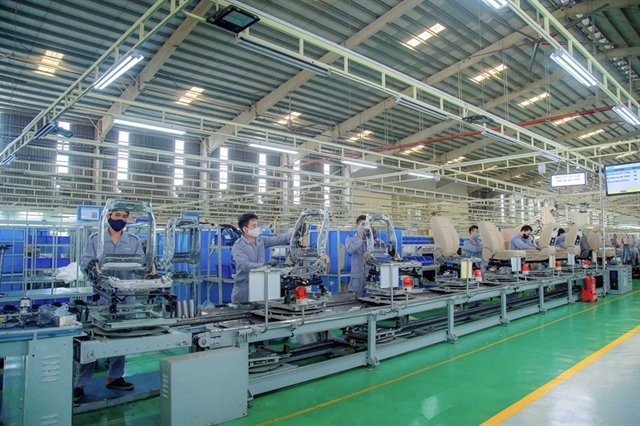 Workers make car seats at THACO company in Quảng Nam Province. Part suppliers are struggling to seek their own ways to thrive. Photo courtesy of THACO

Only a few businesses have invested in producing car bodies. These do not include engine parts such as gearboxes, safety and electronic systems.

According to the Vietnam Automobile Manufacturers Association (VAMA), a single car has about 30,000 parts, with 80 per cent of components imported and 20 per cent domestically produced. As a result, the price of locally-manufactured and assembled autos is 20 per cent higher that that of imported ones.

Car sales in Việt Nam are expected to reach one million units a year by 2025, opening up substantial opportunities for businesses to develop a supporting industry for the sector.

Experts, however, have said that the production capacity of the existing supporting industry remains poor, especially in terms of capital, technology, and experience. Production and the business environment also lack breakthrough policies.

According to the Ministry of Trade and Industry, Việt Nam is now home to more than 350 enterprises in the automobile supporting industry around the country, of which some 80 percent are foreign-invested. Most of the domestic players are of small scale and have difficulties accessing capital to invest in technology, while links between them remain poor.

Experts attributed the poor supporting industry to the small scale of the local automobile market. The Vietnamese auto market is one-third the size of Thailand and a quarter compared to Indonesia. The local auto market is home to many car assemblers of different models. This has resulted in difficulties for domestic car assemblers and part suppliers to invest in purchasing new production lines to meet various demands.

Lê Dương Quang, chairman of the Vietnam Association for Supporting Industries (VASI), said over the past 30 years, a series of policies for the local auto industry and supporting industry had been enacted. However, feasibility and effectiveness of the implementation remained poor.

The three largest car makers in Việt Nam, including Thaco, Hyundai Thanh Công and Vinfast, have taken the initiative in investing in part suppliers to enhance the localisation ratio and export volume of spare parts and vehicles.

Thaco was successful in exporting cars while other local car makers considered shifting to import and export of auto spare parts. A series of Thaco’s spare parts and products have been also exported to Korea, Japan, Malaysia, Italy, Russia, Cambodia, Turkey, and Kazakhstan.

The VinFast automobile manufacture factory of Vingroup will also set aside 70ha of its land for potential supporting industry to put up their own plants as VinFast targets using 60 per cent local parts in its cars and 100 per cent for electric motorbikes.

The Ministry of Industry and Trade also said that the market size and different prices between domestically-produced and imported cars as well as the difference in production costs against regional countries were the two biggest bottlenecks of Việt Nam’s automobile industry.

VASI Chairman Quang affirmed that supporting industry companies acknowledged that it was essential to revive or conduct breakthrough policies. In addition, State-run agencies should work with businesses helping them to overcome difficulties. The Government needed to create more incentives for automotive businesses.