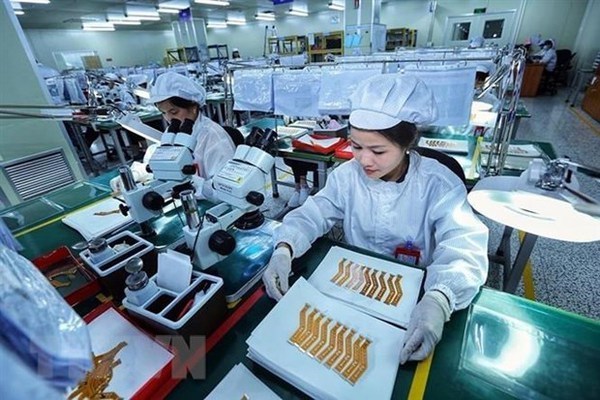 At the same time, the country will prioritise investment projects in high technology, supporting industry, and digital economy innovation, especially in the automotive industry, to create favourable conditions for Vietnamese enterprises to participate in the value chain.

Nguyen Thi Thu Ha, general director of Invest Global, said that with a population of nearly 100 million people and favourable natural and geographical conditions, Vietnam had great potential in the automobile industry.

She added that this was an industry that the Vietnamese Government prioritised developing, with the expectation of building a strong Vietnamese auto industry and making an important contribution to the economy.

However, compared with other countries in the region, the number of Vietnamese suppliers in the auto industry was still very small, and only a few domestic suppliers could participate in the supply chain for automobile manufacturers and assemblers in Vietnam.

Dang Hoang Mai, a representative of the Vietnam Institute of Strategy and Policy for Industry and Trade, said that Vietnam has the potential to develop the electric vehicle (EV) market in the future because the current car ownership rate of Vietnam was at 23 cars per 1,000 people. This figure was only equal to 10% of Thailand and 5% of Malaysia.

With increasing income levels and improved infrastructure, sales and output of the auto industry are forecasted to grow in 2021-2030.

However, contrary to the trend of rising car consumption, enterprises operating in the auto industry, especially the auto manufacturing supporting industry, did not grow as expected, said Mai.

The localisation rate for personal cars with up to nine seats is low at less than 20%, of which Thaco reaches 15-18%. Toyota Vietnam is the highest at 37% (for Innova models).

This number is much lower than in Thailand, Indonesia and Malaysia.

As the world and region has a great influence on many manufacturing industries, the semiconductor chip industry and the automotive industry, Vietnamese enterprises were expecting to have more partners, and manufacturers of components assembled in the country, said Tuan.

As the sixth largest economy in the world, India’s total investment capital into Vietnam only accounts for 0.2% of the total FDI that 139 countries and territories have invested in.

The deputy director noted that the opportunity to promote cooperation and investment between the two sides was huge, especially with Vietnam boosting FDI inflows into the automotive supporting industry.

At a recent business meeting on the auto sector between Vietnam and India, he said that investment cooperation between the two countries was still not commensurate with the potential.

Association of India (ACMA) was the leading association in India with more than 800 members, contributing to 85% of sales in the Indian auto parts industry.

Through the visit to Vietnam, ACMA wished to explore investment, trade and business opportunities in Vietnam, said the ambassador.

He added that this was an excellent opportunity for businesses of the two countries to find partners, exchange business cooperation opportunities, and learn new technologies, equipment and spare parts in the auto industry./.