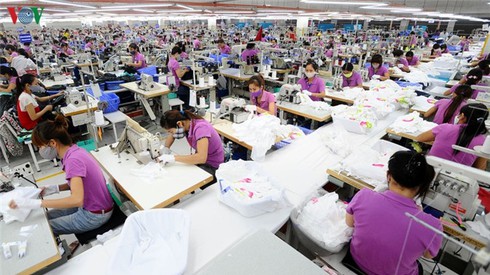 It is anticipated that local textile and apparel firms will not be able to enjoy any immediate benefits from the European Union -Vietnam Free Trade Agreement (EVFTA) once it enters into force due to rules of origin, according to insiders.

Once the EVFTA comes into effect, several tariff lines will be slashed to 0%, with the firm aiming to increase the export rate to this market from between 5% and 8% this year to between 12% and 15% next year.

In line with the commitments outlined in the EVFTA, the EU has pledged to exempt import duties on 42.5% of tariff lines for garment and textile products exported to the bloc, while the remaining tariff lines will be gradually reduced to 0% over the course of the next five to seven years.

Garment and textile enterprises are therefore being advised to strictly follow the rules of origin on fabric and other requirements which relate to the outsourcing stage as stipulated by the trade pact in an effort to boost exports to the EU and enjoy the tax reductions set out by the EVFTA.

Accordingly, fabric used when making clothes must be woven within the country, EU member states, or third-party nations that have signed FTAs with the EU.

Tran Nhu Tung, deputy general director of TCM, expressed his belief that the company’s clothing products will be able to enjoy preferential tax from the EVFTA as TMC is also a supplier of yarn and producer of fabric.

Tung therefore predicts that Vietnamese clothing manufacturers will move to increase the purchase of the company’s fabric products in order to enjoy preferential tariffs, rather than simply importing fabric from the Chinese market.

At present, TCM will continue to expand fabric production in an effort to seize opportunities from the EVFTA, Tung noted.

Pham Van Viet, chairman of Viet Thang Jean’s board of directors, said the company’s garment exports to the EU are now subject to a tax rate of between 14% and 18%, depending on their respective product category.

Viet emphasied that the trade deal will allow businesses to lower their production costs and move to enhance their competitiveness, while simultaneously increasing the proportion of exports to EU market in the near future due to import duties being slashed to 0%.

The representative from Viet Thang Jean stated that the company has already changed its the supply source of fabric from China to Thailand and the Republic of Korea (RoK), both of which have signed an FTA with EU.

Despite this, not all garment enterprises have followed the example of TCM or Viet Thang Jean by making timely preparations in an effort to enjoy the full benefits from the EVFTA. In fact, Vietnam largely imports fabrics from the Chinese market or from countries at the request of foreign customers.

To resolve the shortage of fabric materials and enjoy the incentives of the EVFTA, some firms use imported fabrics from the RoK for sewing in Vietnam. However, the rate of importing fabric from the RoK market still remains low due to local businesses prioritising the import of fabrics from China thanks to lower prices, geographical advantages, and diversification of designs.

Moreover, it is estimated that 60% of fabrics imported into the country come from either China or Taiwan (China), with prices far lower than those which are imported from the RoK. This has led to difficulties for local companies enjoying preferential tax rates from the EVFTA.

This shortage of fabric materials can also be attributed to the fact that some localities do not grant investment licenses to dyeing and weaving projects due to increasing concerns regarding their impact on the environment.

According to a representative from the Vietnam Textile and Apparel Association (Vitas), some localities have decided to reject projects with investment capital of up to hundreds of millions of US dollars due to worries surrounding their environmental impact.

Vitas stated that this represents a major challenge for the industry as they try to meet regulations whilst enjoying export tax benefits to European markets.

Most notably, the injection of money into the country by foreign investors will contribute to developing supporting industries for the textile sector, thereby helping to boost the localisation rate and avoid a heavy reliance on imports.

Vitas leaders point out that whilst only a few textile and dyeing projects have violated environmental regulations, many localities turn down the majority of projects, causing difficulties for businesses as they are dependent on the supply source of fabric materials from the country.

As such, economic experts have advised localities not to worry much about missing out on opportunities to enjoy preferential tariffs in numerous markets.

Economists underscored the importance of zoning plans for projects and application of advanced technologies in a bid to ensure the environment protection and the supply source of fabric materials within the country. VOV