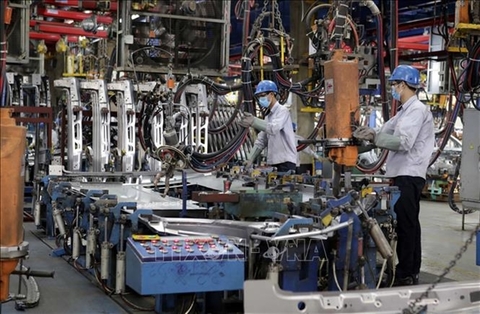 Vietnam is looking to work closely with foreign firms such as Samsung and Toyota to boost the supply of parts within the country, according to the Ministry of Industry and Trade.

Workers at a car factory in northern Viet Nam. Viet Nam aims for 6-6.5 per cent GDP growth this year.

The ministry said major industries including car manufacturing, electronics, textiles and footwear were high on the priority list this year.

The ministry is to provide domestic firms with the necessary support, especially for those in key industries, to join the supply chain and speed up global integration.

“Meanwhile, the ministry encourages large international corporations in Viet Nam such as Samsung and Toyota to actively look for suppliers among domestic firms for both short and long term production plans,” said Deputy Minister of Industry and Trade Tran Quoc Khanh.

In a recent report by the ministry, industrial production during 2021 experienced a downturn but was largely able to maintain momentum, including a 4.82 per cent increase compared to the previous year, higher than the overall growth of the economy.

“The slow development of supporting industries within Viet Nam has resulted in a lower-than-expected localisation rate and lower value-added among industrial products,” said Khanh.

He said the country must address a number of key issues such as overreliance on imported machinery, raw materials, slow technological transfer and the weak link between foreign and domestic firms in the near future.

The expert explained that factory wages in Viet Nam are about two-thirds below those in China, but the quality of the workforce is comparable.

Secondly, Viet Nam has close geographic proximity to Asia’s supply chains – especially in the high tech industry. Also, Japan and the Republic of Korea (RoK) face structural issues that compel both countries to invest abroad – and Viet Nam is the most attractive destination in the region.

Further, the two countries are currently burdened by “secular stagnation”, which is primarily caused by poor/declining demographics, and other factors, including heavy debt. Japan’s demographics started seriously deteriorating around 1990, and the Japanese responded to the country’s deteriorating economic prospects at that time by aggressively investing in Southeast Asia, the expert added.

The RoK’s demographics are even worse, ensuring that investment from there will also continue to flow into Viet Nam for years to come.

In addition to the three factors highlighted above, an increasing number of multinational corporations are seeking to diversify their manufacturing outside China.

While all of the factors above help explain why FDI inflows into Viet Nam have remained resilient over the last two years, the same factors will also help propel those in 2022. That said, there were three developments in 2021 that will also help support inflows next year.

Firstly, the US Treasury Department and the State Bank of Viet Nam reached an agreement in July that essentially removes the risk of Viet Nam being labelled a currency manipulator in the future, which will give multinational companies more confidence to invest in Viet Nam.

Next, the impressive speed of Viet Nam’s vaccination campaign once the Delta variant emerged gives foreign companies confidence that the government is committed to achieving a prudent balance between public health and economic health concerns in the “living with COVID-19” strategy.

Finally, the most recent development that should encourage future FDI inflows to Viet Nam was the announcement that Denmark’s LEGO will invest US$1 billion to build one of its biggest factories in southern Viet Nam, Kokalari concluded.